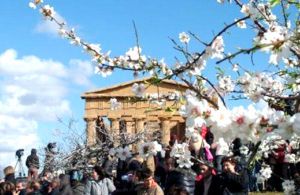 Blossoming almond tree in front of the Temple of Concordia, Agrigento – image via urbanpost.it

A torchlight is inflamed right in front of the staggering Temple of Concordia in the Valley of the Temples during a Sunday afternoon in early February: this is how the Blossoming almond tree Festival in Agrigento starts, together with a parade marching through the whole UNESCO-Awarded Valley. We create for you a special villas catalogue about that then check out our Sicily Valley of Temples villas to rent.

Almond trees start blossoming in this period: the city of Agrigento celebrates this colourful event anticipating the arrival of spring with the Festival of Folklore, a cheerful and entertaining celebration that gathers people from all over the island. The protagonists of the Festival are folk groups coming from all over the world: during the ten-day event, the main streets and squares of the historical centre of Agrigento are studded with folk groups challenging each other with their outstanding performances – dances, music, entertainment and colourful traditional costumes. A pleasant joyful atmosphere pervades the ancient city and its most famous landmark – the Valley of the Temples – during the whole celebration. A succession of parades, colours, beautiful costumes, live shows and exhibits that ends right where it began, with the ancient and majestic Temple of Concord as setting, when a final show is performed during the last day of the Festival and the award ceremony takes place. All around, the flowers of the almond trees create an enchanting background: the best way to start getting into the “spring mood” indeed if you’re staying in our villas in Sicily near Sciacca!