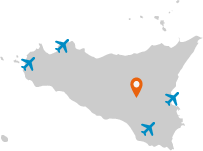 Choose the dates for your stay

Looking for nearby villas
Prices include →

Extra (to be paid locally in cash):

Country House Aidone is a prestigious farmhouse and historic 17th-century country house, about 450 square metres in size. Totally immersed in nature before the majestic Mount Etna volcano, the farmhouse lies within the Morgantina Archaeological Park, among the hills and cultivated fields that once formed the granary of ancient Rome.

Handed down through generations from father to son, this mansion has been restored with great care and attention to the details that have furnished it with every modern comfort, without altering the characteristic spirit and beauty of homes from another time.

On the first floor of the house, the interiors are enriched by detailed ceilings with precious stuccoes and elegant vaults. The doors of the rooms remain those of past times in form and colour, also surmounted by ancient stuccoes. The salon is characterised by a fireplace decorated with precious ceramics of Caltagirone and a large terrace that dominates the valleys in front of Mount Etna. The entrance and the rooms retain the unchanging taste of tradition that makes this house so unique. The modern, furnished kitchen is flanked by a spacious pantry room.

The large Roman-style pool enjoys sunshine throughout the day, with the gift of a magnificent view of the heart of Sicily and the Etna volcano. The farmhouse is the perfect place for those looking for relaxation and breathtaking views – the ideal place to live in contact with nature, history and archaeology.

In the flat below lives permanently the maintenance/guardian of the property, a very discreet person (during the day he works outside).
Always available to guests in case of need.

Morgantina is an ancient Roman and Greek city, an archaeological site in the territory of Aidone, an Italian town in the province of Enna in Sicily. The city was brought to light in the fall of 1955 by the archaeological mission of the University of Princeton.  The most easily accessible area belongs to the period that goes back from the middle of the V to the end of the 1st century BC, the period of the greatest splendor of the city.

From this site come very important archaeological finds such as the Venus of Morgantina, currently housed at the archaeological museum of Aidone which came on March 17, 2011 after the dispute between Italy and the United States where it was exhibited at the Getty Museum in Malibu, and the Treasure of Morgantina, also returned.

- Pool open Easter to end of October
Note: in the flat below lives permanently the maintenance/guardian of the property, a very discreet person (during the day he works outside). Always available to guests in case of need.

Standard booking conditions include a minimum of 3-4 nights for villas and 2-3 nights for apartments. Different booking conditions may apply for specific properties or seasons. Always check booking availability and rates for your stay. If you have specific requests don't hesitate to make an enquiry. The bedrooms made available, where the number of guests is below the maximum occupancy, and in case of a reduced rate due to the lower occupancy, will be adequate for the number of guests to stay there. The accommodation is for exclusive use.

Extra (to be paid locally in cash):

All villas provide for the retention of the security deposit, before check-in, by pre-authorisation on the credit card or by bank transfer.

The deposit will be refunded upon departure, less any damage or consumption (in excess of that agreed in the booking). Greater compensation for further damage is always legally valid.

From this villa's guests 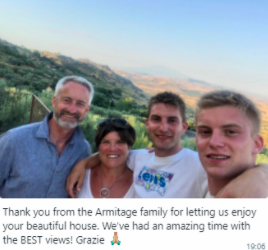 From all our guests
Trustpilot