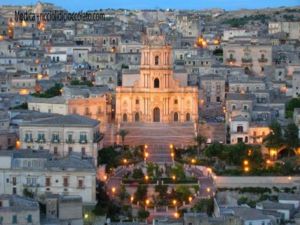 In south-eastern Sicily the countryside is peaceful and pleasant: the plateau of the Hyblaean Mountains, within the provinces of Syracuse, Ragusa and Catania, is composed of limestone hills and low mountains, often eroded by rivers creating steep canyons and sharp valleys alternating with gentle hills rich in carob and almond groves, as well as woods and vineyards separated by low dry-stone walls, typical of the area. The atmosphere is really delightful: trekking or horse riding in the Hyblaean Mountains is highly recommended to anyone wishing to discover the authentic and unique landscapes of this beautiful area. Nearby you will find a large selection of our best estates in the Southeast checking out our villas in Noto and surroundings.

Alongside Noto, Palazzolo Acreide, Scicli and other lovely towns, two other extraordinary destinations are part of the Hyblaean Mountains. Ragusa is also called “the city of bridges”: the two parts of the city, the ancient one (Ragusa Ibla) and the new one, are separated by a deep gorge and connected by three bridges. The history of this city is quite different from the rest of the island, which is why it has also been called “the other Sicily”: its economy and quality of life reach the highest levels compared with the other main cities of the island. Moreover, its ancient part called Ragusa Ibla is an extraordinary collection of the most refined baroque architecture of Sicily, and is therefore listed among the “Baroque centres of the Noto valley” considered UNESCO World heritage sites. Its remarkable Cathedral dedicated to Saint George is particularly stunning, with its imposing 250-steps stairway and its elegant façade developed on three levels, and a beautiful neo-classical dome; other interesting monuments and buildings include the Church of Saint Joseph, with refined statues decorating its façade and an oval structure inside, the Palazzo Zacco, one of the most beautiful palaces in Ragusa indeed, and Palazzo Cosentini, with its finely decorated wrought-iron balconies.

The historical centre of Modica is a UNESCO World Heritage site as well: just 15 kilometres south of Ragusa, this city has an ancient history too – first inhabited by the Sicels and the Phoenicians, Modica has been known for its vibrant cultural and economical life since the Renaissance: philosophers, musicians and even the writer Salvatore Quasimodo, who received the Nobel Prize for Literature in 1959. As it happened to the other towns of the Noto Valley, the earthquake of 1693 destroyed a great part of the city, which was rebuilt with the finest typical Sicilian baroque architecture examples afterwards – the extraordinary Saint George Dome, with its three-level façade rich in lavish decorations and its five-naves structure, as well as the Cathedral of Saint Peter with its remarkable belltower. The city of Modica, however, is also well-known for its delicious chocolate, still produced according to an ancient Aztech recipe brought here by the Spanish during their domination in the Seventeenth Century: its flavour is absolutely one of a kind, and a taste is absolutely recommended!

Plenty of our budget villas in Sicily are located in Modica: from there, you’ll have the chance to visit Ragusa, Syracuse and the beautiful Hyblaean area as well.