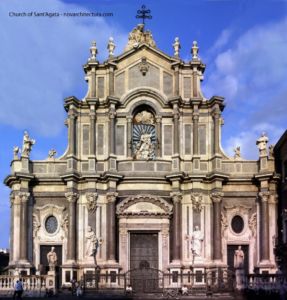 Brushed by the sea on its eastern side and dominated by Mount Etna: welcome to the fascinating Catania. The city is also known as “the black city” because of the colour of its buildings, blackened by the soot and ashes of the volcano, whose eruptions have often damaged or even destroyed the city, which has been nevertheless always able to rise from its ashes becoming more and more beautiful every time. Here you will find our villas in Catania and some of our luxury villas in Sicily.

Graced by a UNESCO-World-Heritage city centre, thanks to the stunning beauty of its baroque palaces and churches built after the devastating eruption of 1669, the city has an ancient and eventful history: it was founded by the Chalcidic Greeks around the 8th Century b.C. on a former settlement of Sicels (native population of the area). As many of the cities of Sicily, its history reflects the history of the whole island: after the First Punic War, Catania was submitted to the Romans and was afterwards sacked by the barbarians and dominated by the Arabs, then conquered by the Normans who made it a royal city and built one of its most important landmarks, the Ursino Castle. Catania was also one of the main centres of the Sicilian Vespers revolution against the French domination of the island, and was annexed to the Spanish Kingdom of Aragon together with the whole island.

The city of Catania is nowadays an important cultural, artistic, economical and political centre in Sicily – and it has been such since the Renaissance: its university was built back in 1431 (one of the first universities of history, the first one in Sicily). Well known for its vibrant cultural activity and lively nightlife, Catania has really a lot to offer to tourists. If you want to discover the biggest Sicilian towns you can check out our selection of villas near Sicily’s main cities.

Its magnificent historical centre is really a must-see: on the “Piazza Duomo” the Cathedral of Sant’Agata is set, built and re-built several times after the eruptions of Mt. Etna, nowadays considered a beautiful example of Sicilian baroque for its elegant façade and magnificent interiors, together with plenty of refined buildings (such as “Palazzo degli Elefanti”, the city hall) as well as the towering lava-stone statue of “U Liotru”, the elephant, symbol of the city. Via Crociferi, however, is the most outstanding evidence of Sicilian Baroque architecture in Catania: the tiny street is studded with magnificent buildings, elegant palaces and churches decorated with gorgeous and invaluable plasters, typical of the Eighteenth-century style. Four awe-inspiring churches can be found within only 200 meters: the church of San Benedetto with its sophisticated archway connecting it to the convent, the church of San Francesco Borgia with its outstanding fresco-decorated dome, the Gesuiti palace with its beautiful cloister, and the Church of San Giuliano, undoubtedly one of the most beautiful churches in Catania, with its majestic altar made with polychrome marble and golden bronze.

Of course there is much more to see in Catania: from a stroll along via Etnea, the most exclusive avenue of the city, to a visit to the Norman “Ursino” Castle now housing an interesting archaeological museum; from the elegant Vincenzo Bellini theatre, a refined 19th-century building whose acoustic is said to be one of the most perfect in the world, to the Greek-Roman Archaeological Park of the city, where the remains of the ancient dominations of the city can still be observed – a Greek-Roman theatre, an amphitheatre, a forum, a Roman aqueduct, and the Greek acropolis of Montevergine.

The city also provides a kilometre-long sandy beach, called “playa”, often very crowded during the warmest months of the year but perfect for sun baths and a swim in the Ionian Sea while staring at the towering giant dominating Catania: Mount Etna.