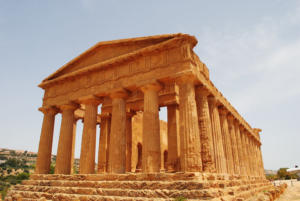 Let’s say you’re art lovers and you’re in Sicily. You absolutely can’t miss to visit the Valle dei Templi, which is next to Agrigento. For the ones who already love this world, the art world, well, let’s just say that they already know what to expect when you’re visiting the biggest archeological site in the world. Pretending you don’t know a thing about it, these are some things you need to know about the Valle dei Templi. Book one of our villas in Sicily near Valley of Temples and go to discover all its treasures!

Valle dei Templi: what you can see

In the Valle dei Templi you can find some of the most important Doric Temple of the Ellenic period of Greek art. This is why, in 1997, the Valle dei Templi has been included in the list of World Heritage Sited drawn by UNESCO. And if you want to discover the other sicilian places in these list, you can take a look to our catalogue of villas in Sicily near the Unesco sites.

The Valle dei Templi includes 12 Doric temples, 3 sanctuaries, an incredibly large necropolis (Terone’s tomb is the most important one); hydraulic works, an Olympeion and a Bouleuterion (the Council room), the upper Agorà and the lower Agorà.

Some of the most important temples are:

If you’re still not convinced to visit this gorgeous place, where you can breathe the real Greek art, maybe the next operas can finally make the right call for you.

As it has been said before, inside the Valle dei Templi you can find a huge necropolis, where you can visit Terone’s tomb, which is composed of tuff.

The tomb is in the shape of a pyramid and it is thought to have been built to remember the fallen during the Second Persian war. The tomb is a naiskos tomb, placed on a high square-based podium, on which the real naiskos stands. It has full walls and fake doors on it.

The Fragapane caves: the funeral passages

The Fragapane caves are the most interesting examples of catacombs in Sicily, and their construction date can be found around 4th century a.C. A long arm oriented North-South connects the sub divo necropolis (outdoors) to the hypogeum, with a succession of two roundabouts that have oculi on the ceiling. Both the rotundas and the corridors open burial niches and cubicles.

At this point, you should have been convinced to visit this huge archeological site (more than 1300 hectars of extension!). The Valle dei Templi really changes your life, it also changes your bond with the art world and brings even the most reluctant to do so to this world.

One more thing: to really enrich your time in Sicily, don’t forget to book one of our villa from Scent of Sicily’s catalogue!