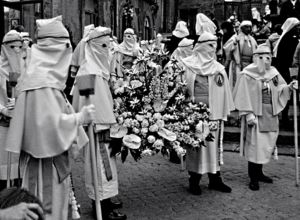 In the “navel of Sicily”, mythology and history are strictly connected with rituals and ancient traditions from the Middle Ages: the marks of this invaluable legacy can be found not only in its monuments, but also in its celebrations. The most important and interesting event takes place during the whole Holy Week: a series of religious celebrations that can be considered one of the most stunning inheritance of the Spanish domination of the city, involving the whole citizenry and its ancient brotherhoods especially.

The customs and legacy from the ancient dominations and the great influence they still have on the whole city can be admired at their best expression during the Holy Week: the celebration is filled with symbols and rituals coming directly from the Spanish tradition, including the clothes of the brothers and the typical food served during the Holy Week. The most touching and sensational event takes place during Good Friday, when the hooded members of the brotherhoods perform a moving torchlight parade.

The event starts on Palm Sunday, when the brothers put on a live scene of Jesus’ arrival to Jerusalem on the Papardura Sanctuary, clinging to the side of the mountain. The parade is acclaimed by the devotees and the marching band and reaches the church of Saint Sebastian, where the crowd participates to the benediction of palms and olive branches and then goes on through the winding streets until the church of San Leonardo, while all the members of the confraternities reach the Dome in Enna to spend (in turn) an hour of prayers in the typical ancient dialect of the city.

On Wednesday, a fascinating “sung mass” is held, while the members of the confraternities “invade” local taverns to take some relief from the hours of prayers: the whole historical centre is filled with a cheerful and lively atmosphere.

The whole citizenry is involved in the rituals of Holy Thursday: from the foot washing rite in the morning to the pilgrimages until late night. All churches of the city set up a sepulchre by properly adorning the main altar, and an impressive crowd pours out in the streets since it is said that every citizen must visit at least three sepulchres.

On Good Friday, the celebration reaches its climax. It’s the most exciting day of the Holy Week, characterised by a heartfelt and intimate atmosphere that attracts thousands of visitors every year: it’s one of the most unique and peculiar events in Sicily and is patronized by the European Union for its extraordinary historical and cultural value. It all starts with a mass held in the Dome and also known as the “Rite of the darkness”. Meanwhile, a huge parade starts from the Church of Saint Leonard with all the members of the brotherhoods and reaches the Church of Addolorata, where the typical “vara” carrying the statue of Holy Mary is carried throughout the crowded streets of the historical centre, while the band plays mournful funeral marches: the atmosphere is tragic as it aims at recreating the tragedy experienced by Holy Mary. Meanwhile, the Brotherhood of Passion carries the “Misteri” (statues portraying the Passion of Christ, similar to those of Trapani) through the city.

The statue of the Holy Mary reaches the Cathedral at late afternoon; all the brothers enter the church to pay their respect to the urn of Christ.

And then, the most enchanting and striking moment starts: the longest parade in Sicily, (about 3,7 kilometers, from the Dome to the cemetery and back) performed by all the members of the confraternities, all hooded and carrying a torchlight, with the statues of the Holy Mary and of Jesus as well as an inestimable silver cross containing one of the thorns of the crown of Christ (the “Holy Thorn”) on their shoulders. Three thousand hoods and lights, and an amazing number of devotees and visitors: silence and reflection surround the parade, and the only audible sounds are those of the songs in dialect and the funeral marches.

The parade ends after the brothers have taken back the statues where they belong – the statue of Jesus in the Cathedral and the statue of Holy Mary in the Church of Sant’Antonio, where the carriers of the statues are given biscuits and wine.

On Easter, another procession takes place in the late afternoon – the Procession of Peace, once again a Spanish legacy: the statues of the Virgin Mary and the Resurrected Christ are taken to the Cathedral, and once they “meet” the black veil covering the statue of the Virgin Mary falls down, the bells starts ringing and the two statues “run” towards each other.

A truly unique and heartfelt event indeed, that will make everyone who lives it experience an atmosphere that was thought to be lost forever…
To find the best place to stay during your stayin Sicily, please check out our Countryside villas in Sicily.