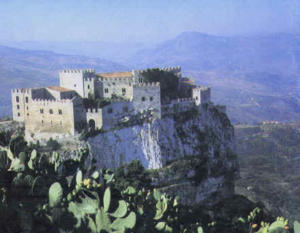 The Castello di Caccamo is one of the best examples of medieval architecture in Sicily.
For those who want to know all the beauties of Sicily, they have to make a stop in Caccamo, rent a Sicily villa near Palermo and find out this pretty medieval town at 520 meters above sea level, which stands on a hill at the foot of Mount Eurako or San Calogero above Termini Imerese.
The town is somewhat characteristic, with its churches, roads, landscape and local traditions, but what makes it truly unique is seen on the right as soon as you enter, on top of a large cliff: probably the largest and best preserved castle in Italy.
The Castle of Caccamo is erected on a high rocky base, to dominate the landscape, like a natural extension of the stone walls.
The first realization was probably to be a simple watchtower then expanded with defensive purposes up to the last design structured on four external towers and three internal towers in defense of a narrower turn of walls (the Mastra tower, collapsed in part following the earthquake of 1823, the Gibellina tower and that of the Fossa or Dammuso).
You enter the castle for a long climb in steps: walking along it seems to take a dip in the Middle Ages and you expect to see a knight on horseback at any moment. On the right, a crenellated wall from which you can admire the town from above and on the left the prospect of the castle resting on the rock. A stone bas-relief of a hand holding a balance recalls the baronial right to administer justice.
After passing the entrance to the old stables on the left and on the right the guardhouse, through an arch, you reach the panoramic terrace on the valley where the small court chapel stands.
An arch a little further on leads to the prisons. In some cells there are numerous graffiti and paintings made by prisoners. There is also a room with a trap door in whose bottom there must have been blades that inflicted the death of the victim.
The large atrium with the seventeenth-century portal then leads into the great hall of the notorious conspiracy of Bonello and the other rebels.