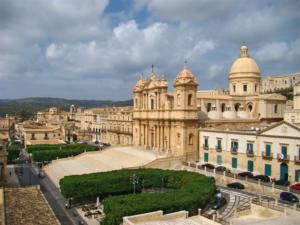 Noto is a wonderful town located in the south coast of Sicily, famous for owning many monuments and spots to see that were listed in UNESCO World Heritage. The city was founded in 1703 when, after the heartquake that destryoed Noto and many other towns in this part of Sicily, the aristocracy decided to rebuild the town following the Baroque style of that age. Thanks to that decision, now Noto is crowed by many tourists from all over the world who rent a villa with pool in Sicily and discover this enchanting town.

There are very few towns in Sicily as rich of beauties as Noto. Its large streets, extended from east to west, are interrupted by squares, stairs and terraces to create a wonderful atmosphere in a unique mix of architectonical elements. It is the result of the healthy competition started among all the architects and the other artists during the rebuilding of the town in XVIII century.

Now, here some tips to discover the best things to see in Noto in just one day:

This list is what we suggest to see if you are in the south-west part of Sicily, or near Syracuse. But if you have more time to visit this great town, keep in consideration some other spots like: Museo civico, Porta Reale, Monastero Benedettino and Chiesa di Santa Chiara.