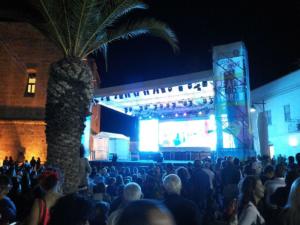 “Make Cous Cous, not walls” is the edition 2019’s slogan of San Vito Cous Cous Fest, a traditional festival set in one of the most beautiful sea place in Sicily, or rather San Vito Lo Capo.

This edition the festival turns 22 years and, over the years, it has become one of the most important in the world both for cous cous lovers and for who cook it. In fact, you have to know San Vito Cous Cous Fest is above all an international cooks contest where you will be able to watch the competition and taste all the different types of cous cous. Indeed, as you can understand by the slogan, it is also an occasion to deal with the problem of racism and to fight it through the mix of cultures caming from all over the world.

For this reason, joining the festival means to discover many cultures and mixing with them, tasting typical food, meeting so many people and, why not, exploring the town of San Vito Lo Capo. Book now a Sicily beach villa from our catalogue and enjoy the San Vito Cous Cous Fest!

Of course, the competition is the most important feature of this contest but the festival, this year from September the 20th to September the 29th, is surrounded by many other events, like concert, movies and cabaret show. Here’s to you the program:

This schedule is just a part of all the events of the whole San Vito Cous Cous Fest, so we suggest you to stay as much as you can in this special town to join a great part of the festival. And during these days, thanks to the good weather of September in Sicily, you will be able to explore San Vito’s beach, considered the best beach of Italy, and explore the surroundings.