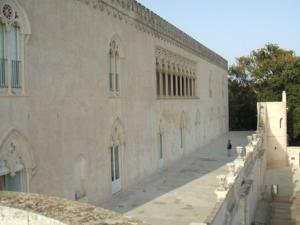 Sicily is full of enchanting old castles, but one of the most famous is surely the Donnafugata Castle in Ragusa. Ragusa is situated in south-east Sicily and, despite it isn’t one of the biggest cities of the Island, it is worldwide known for its natural and artistic beauties.

It is difficult to understand exactly when the Castle’s constructions began because the are many legends about it. All we know is that the building was bought by the nobiliar family Arezzo-La Rocca in 1648 becaming, step by step, in a an imposing Neo Gothic Castle. During the XIX century the construction works were completed by Corrado Arezzo, an important sicilian politician. Since 1982 the Donnafugata Castle is a property of Ragusa becaming one of the most famous landmarks of the city and of the whole south-east area. Nowadays, in fact, tourists from all over the world book one of our family villas in Sicily  and come to Ragusa to visit the Donnafugata Castle.

There are many different opinions and legends about the name of the Castle; the most interesting is that one tells about a woman who escaped from there, so donna fugata in italian language. According to this legend, in fact, that woman was queen Bianca di Navarra, king Martino I D’Aragona’s widow, who was imprisoned by Bernat Cabrera, a spanish warlord who wanted to steal of Martino’s place, both as husband and as king.

Donnafugata Castle is divided in 3 floors: there are more than 100 rooms featured by many different styles and functions. For example: inside the Music’s Room it is possible to observe some paintings created with the tromp-loeil technique, while inside the Blazon Room we find all the Sicilian noble families’ arms and, in the picture gallery there are many neoclassical paintings from Luca Giordano’s school. Outside, a huge park around the castle was used to enjoy inhabitans and their guests and it was also a way to avoid the boredom, typical feature of the aristocratic life.

The building is also famous thanks to some italian movies and fictions like I Vicerè, Il racconto dei racconti, the famous and very appreciated Il Commissario Montalbano with Luca Zingaretti, and Ficarra e Picone’s Andiamo a quel paese.