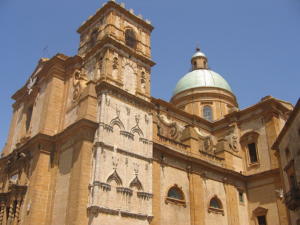 Located exactly in the center of Sicily, 30 minutes from Enna, Piazza Armerina today is one of the most visited places in Sicily. The city has one of the largest and richest historical centers on the island where you can admire historical finds dating back to the Middle Ages which have not lost their charm.

Book a luxury villa in Sicily from our catalog and discover it!

Here are some of the places we recommend you visit in Piazza Armerina:

The Villa Romana del Casale is undoubtedly the main attraction of the city and one of the most important places in all of Sicily.

Formed by 60 rooms and 3,500 square meters of floors entirely made with the mosaic technique, this Villa has been included by UNESCO since 1997 as a world heritage site.

The Villa is formed by four different nuclei: a monumental entrance, the villa itself, with its rooms rich in mosaics and the peristyle, and also a thermal complex. If you have the opportunity, visit it also in the evening, when the Villa is home to musical and artistic events.

The Cathedral of Piazza Armerina is a colossal building that stands on the highest point of the city, in the heart of the Monte district. The building is characterized by an architecture that is a set of styles ranging from Gothic to Baroque, in addition to a 40-meter high bell tower in the Catalan Gothic style.

The exterior was made of sandstone, which with its characteristic yellow color allows its giant aqua green dome (the highest in Sicily with its 76 meters high) to stand out even more, even at a distance of km. Inside you can see a wooden cross, painted on both sides which depicts the crucifixion and resurrection of Christ, a baptistery created by Antonello Gagini and the high altar, in silver, which contains the icon of the Madonna delle Vittorie.

The Chiesa di San Pietro is certainly one of the most important religious buildings in the city. The complex, which includes the church and a convent, was built around the middle of the 1500s to honor a miraculous image of the Madonna located in a small church that once stood there. The exterior of this church, called the “Pantheon of Piazza Armerina“, is quite bare, while its interior, with a single nave, is full of masterpieces.

The Castello Aragonese is located on the southern slope of Mount Mira. Built in the 14th century under the reign of King Martin I the Younger, it has an imposing structure, characterized by mighty walls and four corner towers.

Over the centuries this building, which initially had a defensive purpose, passed from several hands until it became a prison in 1812. However, this is a building much loved by the inhabitants of the city, who right here stage various historical representations and neighborhood parties, especially in the summer months.